One of the most difficult paradoxes of conservation is that every photon of light that allows us to view a work of art is simultaneously working to destroy it.  Some materials are more vulnerable to light damage than others – typically pigmented and organic materials such as textiles, dyes, some paints, inks, feathers, and wood are relatively fugitive, as is seen commonly in faded colour photographs, sun-bleached hair, and even seemingly sturdy paints like car and house paint that has seen better days.  Colour, one of the properties of art and cultural objects that is for many one of the most compelling aspects of it, is usually what is most vulnerable.

Most of the tapestries that are on display in museums and historic houses have a characteristic blueish cast to them.  I’ve discussed this to some extent before.  Some compounds are more prone to losing their colour producing (chromophoric) properties than others, with yellows and purples tending to be the most vulnerable.  When you take these colours out of the picture or dial them down, you get an image devoid of greens, oranges and purples, leaving the picture cold when it should be rich and vibrant.

As an aside, part of what I find so fascinating about colour is the fact that it actually doesn’t exist without light.  Even more real than the tree in the forest adage, the emission of waves from a coloured surface is only made possible by the interaction with a photon of light.  Sure, the molecule exists as one that is capable of displaying colour when excited by a photon but in the dark nothing is happening.  It’s not that we can’t see the colour because of the dark, it is actually that the colour is not being produced for us to see it. 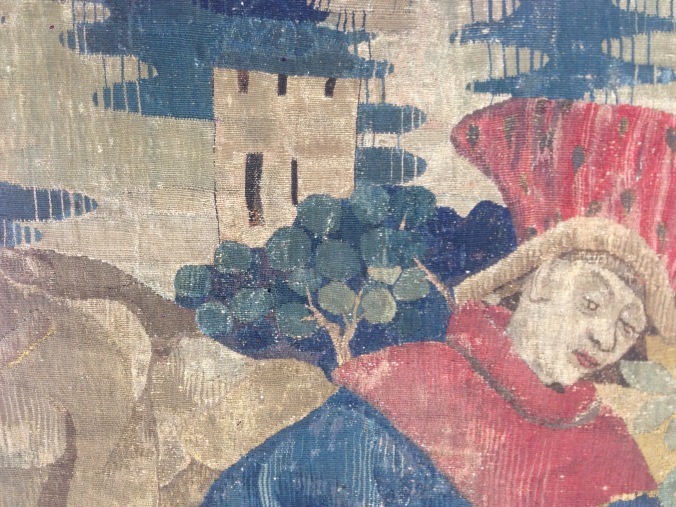 This 14th century tapestry shows typical fading patterns: reds and blues have remained fairly prominent while everything else has faded to shades of pale brown.  From the Burrell Collection.

When a photon hits a chromophoric molecule, it enters what is known as an excited state, and subsequently releases back that a wavelength that most of us can see as colour.  But this has the potential to cause damage, especially in the higher energy UV range such as is produced by the sun and unfiltered artificial lights.  Therefore act of making colour can be destructive on a molecular basis, breaking down the chromophoric properties of the molecule and, after enough exposure, damaging enough molecules in a surface to deaden the colour entirely.

This feeds into the general dichotomy of access verses preservation, two important aspects of cultural objects that are often frustratingly at odds.  How and where to draw that line is a fascinating topic, but far too broad for today’s discussion. 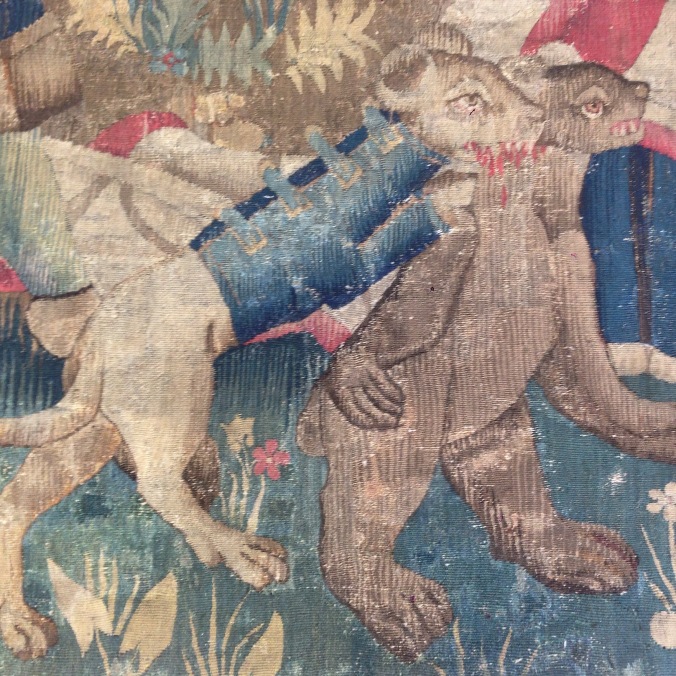 Fading has resulted in loss of detail and form, causing confusion in this scene as image is flattened and foliage is flattened.  Yes, that is a dog in armour attacking a bear cub.  Medieval Europe was confusing.  From the Burrell Collection.

Since tapestries have a clear front and back side and tend to be displayed flat against a wall, an exciting opportunity is created.  The backs of tapestries sometimes can give glimmers into how fabulous these astoundingly expensive wall coverings were (Henry VIII paid significantly more for his tapestries than for even the famous Hans Holbein portrait).

While the Burrell Collection building in Glasgow is undergoing construction, a unique opportunity to conserve and examine its tapestries is underway.  A previous tapestry project had been undertaken some years ago to document the amazing tapestries of the Burrell.  This included removing linings and photographing the back.  To prepare these fantastic textiles for redisplay when the museum reopens, many of these tapestries are being cleaned, supported and re-backed.  This protects them from soiling, and more importantly adds a layer of strength to the 500-year old yarns that are stretched and strained under their own immense weight. 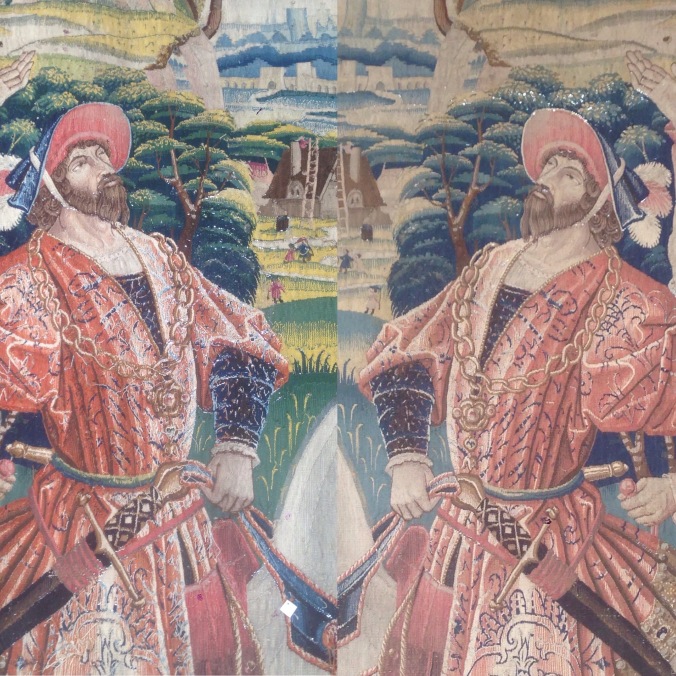 Reverse (left) and front (right) of tapestry.  Note how the loss of yellow turns lush greenery into dull blue flatness.  From the Burrell Collection, Glasgow.

The above 16th century tapestry is pretty spectacular, even from the front.  Despite some typical reweaving and repairs, whole tapestry is very well preserved.  The skill in design, details, and chiaroscuro in the shading is impressive.  The colours on the front seem in good condition as well, but when compared to the back, it’s quite surprising.  The overall dulling of the front remains, but the loss of greens and oranges is the most striking.

Seeing the foliage and landscape transform from a lifeless blue and brown into bright green and shocking yellow brings the image alive.  The contrast of green makes the figure’s salmon outfit pop even more, providing a greater sense of depth.  His cheeks gain a rosy glow.  Figures in the fields suddenly are noticed, where from the front they appear more as dull blobs.  The blue in the distant background is also pulled into greater contrast, showing the artist’s skill and understanding of atmospheric perspective.  Shading becomes more subtle and space is better defined, and details are rediscovered. 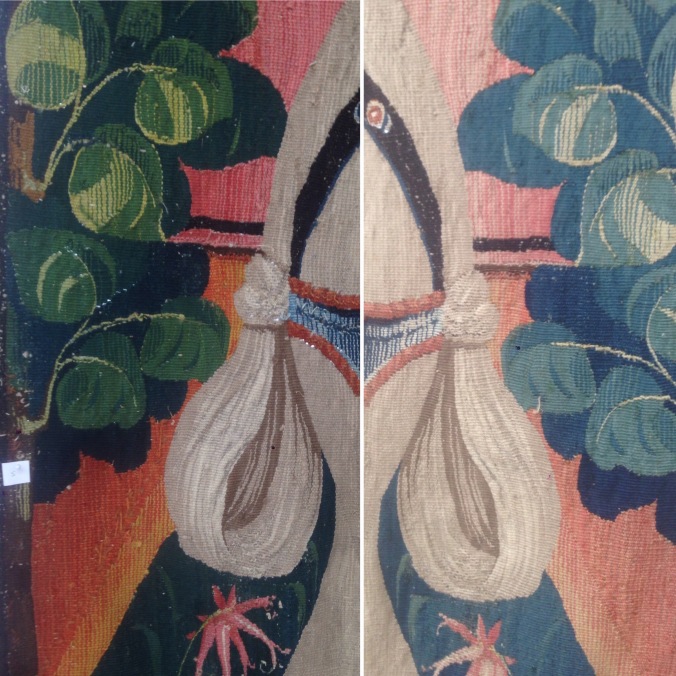 Detail of back (left) and front (right) highlighting the effect of light on oranges, pinks, and greens.  From the Burrell Collection, Glasgow.

While the back must be covered again for conservation, being able to access it gives a fuller understanding of how rich the past was.  Far too often movies show historic dress as drab – not so!  While today these textiles look a bit dim, it’s pretty clear that colour was used, and was often ostentatious. 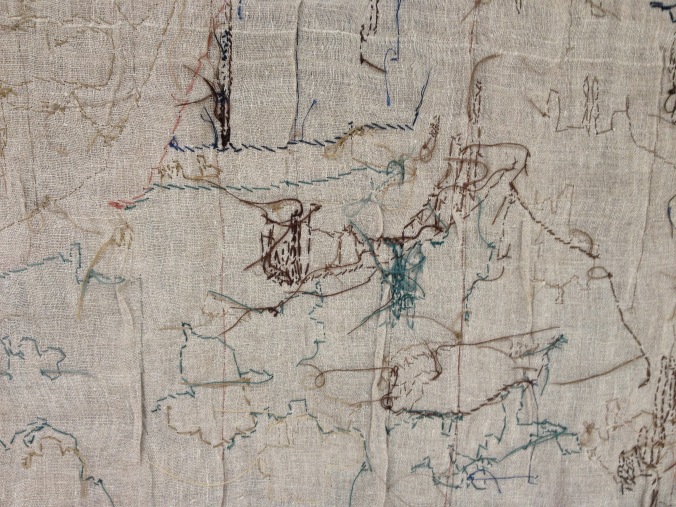 Back of another tapestry during conservation – support layer has been added, and the tapestry awaits a final lining. Excess fabric in this layer allows for shrinkage and expansion from humidity fluctuations.  Colours are now covered but safe.

The added knowledge allows for better interpretation for the public.  Understanding original use of colour can help with visual aids such as accompanying images with enhanced colour or colour projections on the surface of the textile, and instead of relying on imagination can be produced based on the actual reverse image.  It helps our understanding of the past, as well as guides our future practice in preserving our heritage.