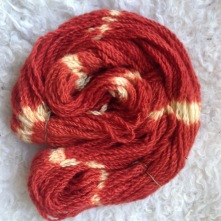 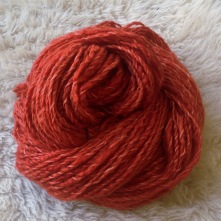 Madder (Rubia tinctorum), as a natural dye, has been around since at least 3,000 BCE. It, along with the usually cooler, more magenta insect dye cochineal, is responsible for most of the reds in Europe, Asia, and the Middle East before the invention of synthetics, and it held its ground into the 20th century. It’s the main component of the famous Turkey Red, coveted for its bright colour and supposed superior light fastness on the notoriously tricky to dye cotton fabrics.   The recipe was important enough to be kept a secret, although it slowly trickled through from Asia to Europe, where it became an important industry here in Glasgow by the 19th century. Although several compounds produce the orangey-pinks to scarlets, alizarin is the most prominent, of which a synthetic version was developed in 1826.

My recent bout of tonsillitis provided a great chance to play around with madder I had lying around. I started with 300g of spun wool fibre, consisting of wool, although one skein had a combination of 68 grams of wool and 15 grams of soysilk. The breeds were blue-faced Leicester (BFL), and organic merino, both of which are considered luxury breeds for their softness, lustre, and warmth.   The BFL, sourced from the UK, had a much creamier colour, while the organic merino was very pure white.

I used an alum mordant, and opted for an imperial/volume ratio of 4 tablespoons alum, 4 tablespoons cream of tartar, and 4 gallons of water per pound wool. I generally prefer weight as it is more accurate, but a scale was not available. C’est la vie. With 300g of fibre, that worked out to 3 tablespoons each and about 3 gallons of water, but let’s be honest, I didn’t measure the latter.

I added my pre-soaked, pre-scoured yarn to a bath of hot water with the above measured ingredients, already dissolved. This was brought up to a simmer slowly then simmered for about 30 additional minutes. Apparently the “natural” soysilk had been dyed a cream colour, and it turned the skein it was spun into a pleasant pale pink.

Following from Gwen Fereday’s instructions from Natural Dyes (2003, British Museum Press), I took my 100g powdered madder from George Weil and slowly added water to make a paste. I used hot water, although in retrospect I wonder if I should have used cold. This looked like brownie batter, and it was very difficult not to eat. I transferred the paste to a metal pot with the help of a silicone spatula, and added about a litre of cold water.

This was placed on low heat and brought to a low simmer. Fereday warns not to boil, as this will give a more yellow, dull red. She didn’t say how long to do this for, but at 20 minutes bubbles were just starting to percolate and the whole mixture was very red, so I turned off the heat but left it on the burner to continue to do its magic for another 10 minutes before removing to cool.

Again following Fereday’s recipe, I diluted the dyebath to enough liquid to cover my fibres, brought slowly to a simmer for one hour, and then kept at or just below a simmer for an additional hour, making sure never to boil. The main dyepot had 150 grams of fibre in it, and I scooped out about a cup or two for dip dyeing skeins in an ombre and self-striping technique. 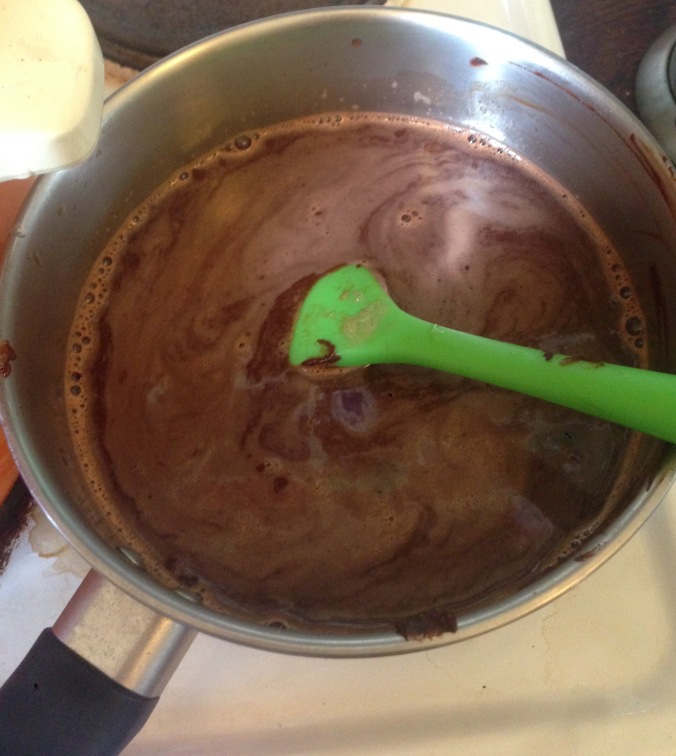 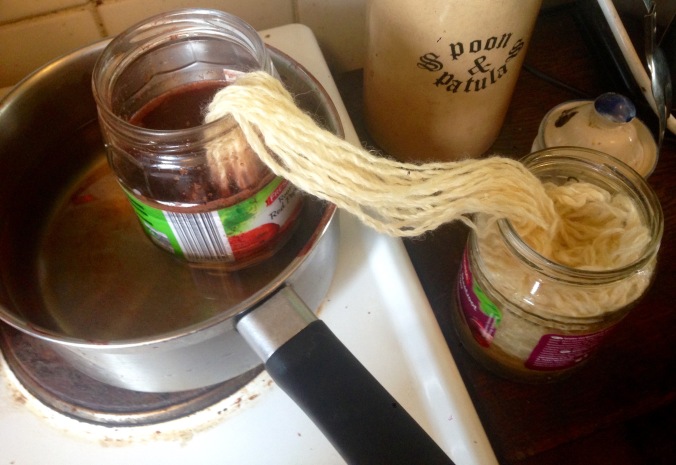 Afterwards, I lifted the wool out with tongs, let cool, and rinsed thoroughly, making sure not to wring or felt the fibres.  Because the root was powdered, rinsing took quite a while.  Skeins were squeezed in a towel and hung to dry.

The results were a bright, rich orange-red, and even the soysilk was dyed, which was a surprise since this is a cellulosic fibre.

Before dyeing, I wrapped one of the skeins cotton twine at regular intervals in order to create a resist dye technique. It worked quite well, and I am now considering if and what I want to overdye with. I will also be contemplating what other dyes to use on my ombre and self-striping skeins. I have alkanet, weld, and a reduced indigo/pomegranate, so I’m looking at purple, yellow, or blue-green. My vote is for alkanet, but that requires some preparation, most likely alcohol extraction.

I froze my remaining exhaust dye liquor, which wasn’t huge in volume at this point, for later experimentation should I chose do go for it.

Two of these skeins are available here and here at my shop, Quercus Fibers.

2 thoughts on “Things That Madder: Dyeing with Rubia tinctorum Roots”